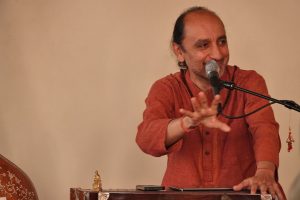 Following Manish Vyas popular workshop with us last year, it is a great pleasure to welcome him to the UK again to offer this time his “Coming Back to Yourself” weekend retreat. We are very excited to have the opportunity to this time immerse into devotional practice with Manish for 3 days. Last year, in just an afternoon we were all deeply touched by his music and teaching, many of us finding ourselves with tears of joy and love, gratitude and bliss streaming down our cheeks as our hearts melted and opened.

This is a different kind of program, based on simple, authentic techniques: working gracefully on different vibrations, from the body to the most subtle – through asana, pranayam, meditation, relaxation and other powerful tools including sound and music. immerse yourself into a few days surrounded by sacred healing music, learning the mystery of sound, listening to enriching mystical stories from india, learning about the power of breath and doing pranayam with music, waking up with meditation and light yoga, relaxing into uplifting and balancing meditation techniques…

You will be in the hands of Manish for three full days. Manish who is originally from Gujarat in India, has learnt from his two spiritual gurus over decades and then shared these techniques over many years in India during meditation camps and retreats. Manish says,

“only after 20 years of following my master, he told me ‘you are ready to conduct retreats and share what you learnt’ – this is how the tradition is in India – we learn patiently during many years and only when our Teacher says we are ready, we start teaching openly.”

Manish Vyas was born in Gujarat, India and has been learning and teaching music since 25 years, which he learnt through the years with different maestros in India. He learnt tabla with Zinda Hussein at his childhood and his first concert happened when he was just 12 years old in Rajkot. At the same time, he was learning harmonium in the company of local expert musicians. At the age of 20, having moved to Pune to pursue his musical career, Manish started learning tabla with Ustad Allarakha, where he continued for many years, while he was in charge of the musical department at Osho Pune Ashram, organizing and performing concerts. During this time, he also learnt to play santoor and keyboard. Manish met Jagjit Singh and played with him in a big performance presented at the Osho Samadhi. This maestro of ghazals, classic and devotional music was a big influence in Manish’s musical life – and still is.

​He is composer, singer, multi-instrumentalist and teacher – tabla, santoor, harmonium, keyboard and other eastern percussion. Along his lifetime musical path, he has composed hundreds of songs, mainly in the devotional, mystical, folk, instrumental and sufi genres. He has released 20 albums of original music and has also contributed to dozens of other musicians’ productions with his compositions, voice and instruments. (see discography) Almost eight hours of his music are also available in the popular meditation App, Silence Finder.

His gatherings, retreats and concerts offer the perfect blend of Indian genuine sounds merged with a touch of fusion, which makes his music so accessible and appreciated by all type of listeners in the search of authentic Indian sounds. When we talks about ‘fusion’ in Indian music, it refers to the incorporation of contemporary elements, but the quality and essence of Indian music remains untouched.

​Manish moved to Switzerland when he married to his Swiss wife and this country and they live in Canton St. Gallen. He used to tour around the world, but since some years ago he has decided to mainly travel within Europe and India, to share his versatile music in different events and venues, as well as teaching in workshops. An interesting information is that Manish is also a yoga teacher – he focuses his practice mainly in surya namaskar, pranayam and dhyan when teaching.

Carrying Indian music in his heart, one of his missions is to maintain the roots of Indian music , in a world where the Indian devotional genre has gotten spread in a commercial way and more than often has not kept its genuinity and essence in the west. That is also one of the reasons he is teaching and giving workshops – to make people interested in this genre aware of the elements needed when doing music from India – in any of its styles. He is currently filming and writing a documentary film about sacred music from India – the cradle of Indian music.

WHAT TO BRING: Please bring your Yoga mat, a meditation cushion and shawl, blanket, notebook and pen, shoes for outdoor walking.

FEE:  £250.00 for 3-day programme,  including supper on friday, lunch on saturday and sunday, payable to LoveYogaHealing. Residential option also possible

VENUE: tbc but in South Warwickshire