3 is a magic number and the mantra Aum tells us exactly why this is. 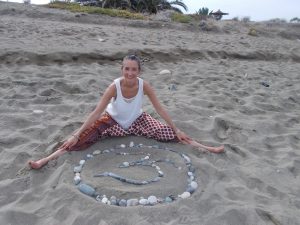 I sometimes hear students grumble about all the different “numbers” in Yoga philosophy – 4 paths of Yoga, 5 koshas, 6 shat kriyas, 7 bhumikas. And there are the three gunas, the three states of consciousness, the three symbollic parts of om or A-U-M, the three doshas in Ayurveda. There is also the trimurti, or trinity – masculine and feminine deities representative of the three aspects of creation, creation itself, maintenance, destruction.  We could do some wonderful saturday afternoon workshops covering each of these topics! It would certainly deepen and advance your understanding of Yoga. Anyone interested? …Please let me know. If the thirst is there, we can certainly gather to learn and grow together.

For now I want to have a look briefly with you at some of the “three’s”. I confess….I wanted to remind you about my three upcoming retreats and three upcoming saturday afternoon workshops. I don’t like to just keep bombarding you with more promotion of more events…though i think you’ll understand that i have to do it.:) So as a way to “give” as well as promote, the idea to share a little about these “three’s” arose.

Actually, when it comes down to it, the symbol om or Aum, comprises all the threes of Yoga. Aum is said to be the “sound of the universe”. What does that mean exactly? Well, creation – matter- is born from vibration. I think modern science would not contest that and this aligns with Vedic understanding of creation. When we chant the sound Aum, it is said that the sounds A-U-M vibrate across the whole palate: back, middle and front of the palate. For this reason it contains all sounds, as all sounds vibrate the palate in some way. And so it is the sound of the whole creation. From Aum we get our sacred words Amen, or Amin. The Latin word “Omne” also has Aum as it’s root.Yes, it is surprising to us often to know that many of our English language words can be traced back to Sanskrit roots (Sanskrit being the ancient and divine language of India). There is an entire Upanishad (Mandukhya Upanishad) dedicated to elucidating the meaning of Aum.

The symbol aum looks somewhat like the number three funnily enough…with a tail, and a crescent with a dot centred over it above the tail. Here are the different “three” representations of the symbol:

A – symbolises the conscious or waking state (jagratha-avastha).

U symbolises the dream state (svapna-avastha) of consciousness.

M symbolizes the dreamless sleep state (susupta-avastha) of the mind and spirit.

So these are the three states of consciousness elucidated in the Mandhukya Upanishad. However there is a fourth state and the ultimate goal of all the different paths of Yoga is to direct us to this fourth state of consciousness. The entire symbol Aum, together with the crescent and the dot, stands for the fourth state (turiya-avastha). This state combines and transcends all three. It is the state of awakening, Samadhi, a state of super-consciousness brought about by profound meditation, in which the aspirant becomes one with object of meditation and the Universal Spirit. It is the realisation of our true nature, our essential unlimited formless, boundless Self.

Sankhya philosophy, one of the 6 schools of thought from ancient India, teaches us of the 3 gunas (attributes of nature). The idea is that everything in the cosmos is in a state of inertia, activity, or equilibrium/harmony where the seed of action lies. In the symbol A-U-M:

A is sattva guna – harmony, equilibrium, light. purity ..that time of gestation before a thought becomes action.

U is rajas – the action

The three qualities together form the whole of nature/creation, “Prakriti” in Sanskrit. And of course the fourth state again is that realised state that contains all three gunas whilst at once transcending them. The practices of the various Yogas are to help us cultivate the quality of sattva – that state of equilibrium and balance we feel at the end of a good Hatha Yoga or meditation practice. One who has transcended the gunas is a “gunatita” and he/she rests in that fourth state.

The three letters also represent the trinity of the Vedas, representing the three archetypal states of existence:

‘A’ represents the creative power of Brahma (archetypal creative principle);

‘U’ represents the preserving, sustaining power of Vishnu (archetypal energy of preservation);

‘M’ represents the destructive power of Shiva (that archetypal energy that remove all that is no longer needed).

The whole sound contains and transcends the three states of existence, as another analogy for attainment of that transcendental state of consciousness.

This is a very brief look at these different “three’s” symbolised by the mantra Aum. I hope it helps you to understand why we chant aum at the start of so many ancient vedic chants and prayers, and why perhaps you feel such a profound effect from chanting this sound at the start and end of classes. Aum is not a word, it is a sacred sound. And perhaps you can see now that even though this sacred sound comes to us from ancient Vedic India, it is not Indian or Hindu. It is universal.

I will schedule a workshop in which we can look more deeply at this sacred sound and all it represents, whilst also enjoying a powerful group Aum meditation.